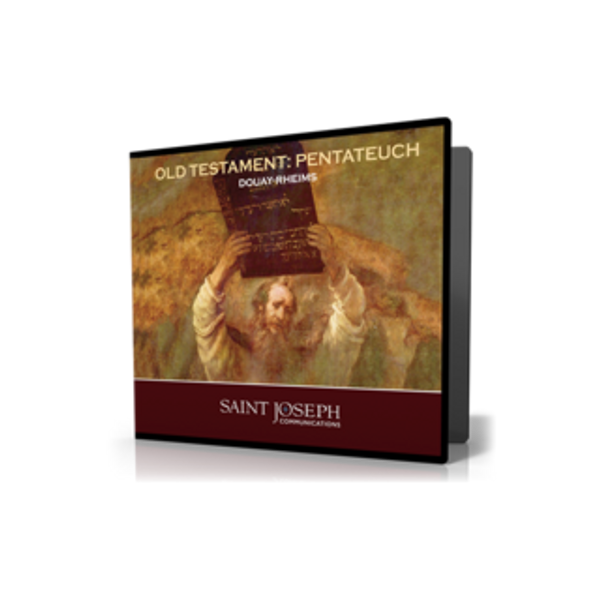 Finally on CD!  Experience the Power and Majesty of the Pentateuch in the Church's Traditional English Translation

The first five books of the Bible are called the Pentateuch, or, in Hebrew, the Torah, which means law. Traditionally attributed to Moses, the books of the Pentateuch present the laws of God and narrate the primitive history of mankind and the actual history of God's chosen people. Read by Edwin Hale, III, the classic Douay-Rheims version captures the great beauty and nobility of the inspired text.

Book of Beginnings
Genesis relates the timeless stories of Adam and Eve, Cain and Abel, Noah, and the Great Flood, Abraham, Isaac, Jacob, and more. Genesis explains the beginning of many important realities: The universe, the earth, human beings, sin, and, most importantly, that the Savior of the world will come through his chosen people.

Moses & More
The next four Holy Books concern the Exodus from Egypt, in which Israel becomes a people under a leader chosen by God. The Book of Exodus tells the story of that leader, the story of Moses. Here are the familiar stories of the burning bush, the harsh life of the Israelites, Pharaoh's hardness of heart and the plagues sent by God, the first Passover, the parting of the Red Sea and the giving of the Ten Commandments.

Worship, Holiness and a New Generation
In the Book of Leviticus, we learn how God gave clear standards to the Israelites for holiness and worship. Then, as now, God's people are to be separated from sin and dedicated to God. The Book of Numbers relates the struggles endured by the chosen people during forty years of wandering in the desert, up to the very border of the Promised Land. Finally, the Book of Deuteronomy is the testament of Moses directed to the new generation entering the Promised Land - to remind them of what God had done and encourage them to rededicate their lives to him.

Now, in the beautiful Douay-Rheims Translation of the inspired words of Scripture, you'll discover the magnificent story of the Old Covenant foundation of the Catholic Faith. Order now and experience the power and majesty of the Pentateuch.

A Note About The Douay-Rheims Bible
The Douay-Rheims Bible is a scrupulously faithful translation into English of the Latin “Vulgate” Bible, which Saint Jerome (342-420) translated into Latin from the original languages. The Vulgate quickly became the Bible universally used in the Latin Rite. Saint Jerome, one of the Early Fathers of the Church, was a man raised up by God to translate the Holy Bible into the common Latin tongue of his day.

He knew Latin and Greek perfectly. He was 1500 years closer to the original languages than any scholar today, which would make him a better judge of the exact meaning of any Greek or Hebrew word in Sacred Scripture. Besides being a towering linguistic genius, he was also a great Saint, who had access to ancient Hebrew and Greek manuscripts of the 2nd and 3rd centuries which have since perished and are no longer available to scholars today. Saint Jerome's translation, moreover, was a careful, word-for-word rendering of the original texts into Latin.

The Latin Vulgate Holy Bible has been read and honored by the Western Church for fifteen-hundred years! It was declared by the Council of Trent to be the official Latin version of the original. The Sacred Council decreed: "Moreover, the same Holy Council . . . ordains and declares that the old Latin Vulgate Edition, which, in use for so many hundred years, has been approved by the Church, be in public lectures, disputatious, sermons and expositions held as authentic, and so no one dare or presume under any pretext whatsoever to reject it." (Fourth Session, April 8, 1546). As Pope Pius XII stated in his 1943 encyclical letter Divino Afflante Spiritu, this means the Vulgate is "free from any error whatsoever in matters of faith and morals."

The Douay-Rheims translators took great pains to translate exactly. Contrary to the procedure of the modern Bible translators, when a passage seemed strange and unintelligible they left it alone, even if obscure, and "let the chips fall as they may." Modern Bible translators, on the other hand, will often look at an obscure passage, decide what they think it means, and then translate in words that bring out that meaning.

The result is that the English is usually (but not always) easier to understand, but it is not necessarily what the Bible actually says; rather, it is the translator’s interpretation and understanding of what he thinks Sacred Scripture says. Moreover, the Holy Spirit may have hidden several additional meanings in the passage, meanings which may well be completely translated out!

Sometimes, the question is raised: Why translate from a translation (the Latin Vulgate) rather than from the original Greek and Hebrew? This question was also raised in the 16th century when the Douay-Rheims translators, Father Gregory Martin and his assistants, first published the New Testament at Rheims.

They gave ten reasons, ending up by stating in the preface to the 1582 New Testament translation, that the Latin Vulgate "is not only better than all other Latin translations, but than the Greek text itself, in those places where they disagree." They state that the Vulgate is "more pure than the Hebrew or Greek now extant" and that "the same Latin hath been better conserved from corruption." (Preface to the Douay Old Testament, 1609).

Moreover, it is more accurate than any modern Bible because it is based on ancient texts, no longer extant, which were "captured" and "frozen," so to speak, by Saint Jerome (342-420) in his Latin Vulgate. The Douay-Rheims is thus the most reliable English-language Bible there is. We look forward to the day when the Christian world will rediscover this fact and come to a renewed appreciation of the monumental work of Saint Jerome, and of the Douay-Rheims translators--men who were raised up by God to make the Bible available to the English-speaking world.

Finding Christ in the Old Testament

Eucharistic Symbols In The Old Testament