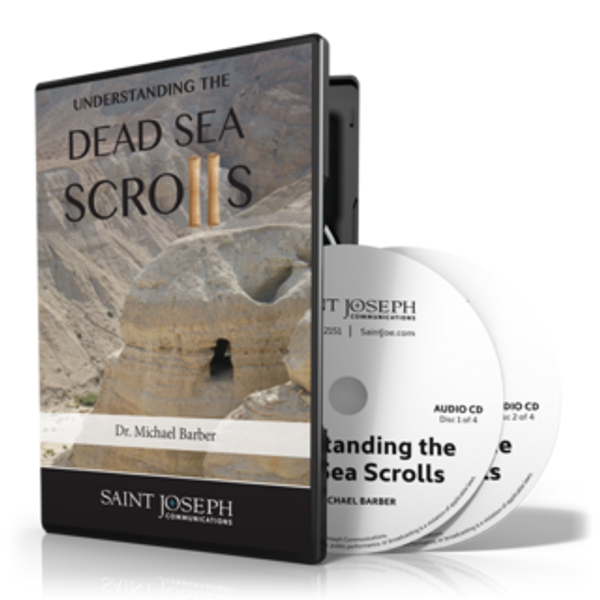 What are the Dead Sea Scrolls? Who wrote them and why? What do they reveal and how does it affect your faith? Do the Scrolls really contain secret revelations that challenge the very foundations of the Christian faith as some “scholars” claim? Has the Catholic Church and a handful of elite religious scholars conspired to suppress the revolutionary contents of the Dead Sea Scrolls?

Greatest Archaeological Discovery of All Time
Now in Understanding the Dead Sea Scrolls, popular Catholic author and speaker Michael Barber, dispels the multitude of myths and misinformation that surround this important archaeological find. As you listen to these four powerful CDs, you’ll soon discover why Catholics not only have nothing to fear from the Dead Sea Scrolls, but also why they are considered by many to be the greatest archaeological discovery of all time!

Michael Barber is one of the most promising Biblical instructors in the Church today. A protégé of Dr. Scott Hahn, Michael’s intense study of the Dead Sea Scrolls will empower you to understand Scripture like never before!

Sacred Time Capsule
Discovered by a young shepherd in 1947 near Qumran, Egypt, the contents of the Scrolls are so fantastic that it’s hard to overstate their importance. Like a sacred time capsule of the early Christian era, they provide an invaluable window on the past that has revolutionized the way biblical scholars think about first century Judaism. According to Michael Barber, it’s the next best thing to taking a time machine to Jesus’s day.

With the authoritative teaching in this series, you’ll learn how the Dead Sea Scrolls demonstrate the accuracy of modern Catholic Bibles, how the evidence of the Scrolls put an end to the issue of the canon of Scripture, how the teachings of Jesus reflect the theology of His day, and how the biblical Covenants are the key to understanding the story of the Old Testament and its fulfillment in the New Testament.

Deeper Appreciation and Greater Understanding
As you uncover the secrets of the Dead Sea Scrolls, you’ll gain a deeper appreciation of just how much New Testament imagery relies on Old Testament references. And you’ll gain a greater understanding of the Jewish historical context that so greatly influenced the ministry of Jesus and the development of early Christianity.

The Immaculate Conception: A Biblical Understanding

Understanding Sacrifice and Sacrament in the Book of Leviticus (Digital)

A Biblical Understanding of Mary (Digital)