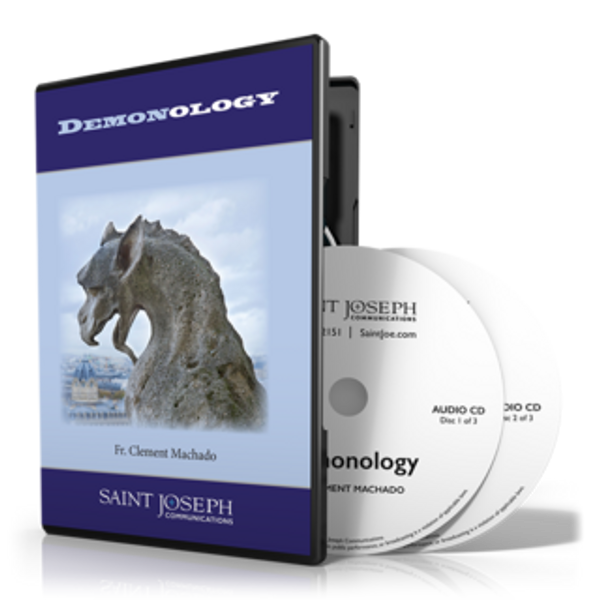 
Discover Powerful Weapons for Your Personal Arsenal in the Battle Against Satan
The Enemy. The Accuser. The Evil One. How real is he? Do we really need to defend ourselves against a powerful, preternatural opponent who conspires with the world and the flesh to hinder our spiritual progress? How should Catholics in today's world view the Scriptural notion of personified evil?

Spiritual Warfare
In the provocative three CD set, powerful mission preacher and EWTN personality Fr. Clement Machado, examines the existence of the devil in the light of Scripture, the Catechism, Papal Encyclicals, the Fathers of the Church and his own experience as a Catholic Priest. With an impressive depth of conviction, Father conclusively demonstrates the constant teaching of Jesus Christ and His Church that spiritual warfare is to be taken seriously by every Christian.

He reminds us that the spiritual battle against our own sinful nature and the wiles of the Tempter is inseparable from the battle of prayer. In fact, when we pray the words of Jesus in the Our Father, the evil we ask God to deliver us from is not an abstraction, but Satan, who does all he can to turn us away from prayer and away from union with God.

Fallen Angels
Fr. Machado reveals through Scripture and Tradition, the undeniable reality of Satan and the other fallen angels. And so our battle with sin is fought not only on a natural plane, but also, as St. Paul puts it, “against the powers of darkness and wicked spirits in high places.” In a psychologically oriented culture that denies the very existence of the devil and even of sin, it's vitally important to realize that Satan is not a part of human nature, but distinct both from us and from the sin he leads us into. And so it is a grave error to exclude the possibility of diabolical influence, as so many contemporary Catholics are prone to do.

Spiritual Armor
A leading cause of Satan's powerful presence in our culture, says Father, is the decline in private devotions in these postconciliar times. In the powerful concluding talk of this series, Fr. Machado shares the remarkable truth about satanic influence in our lives, the dangers of taking on the devil directly and the most effective prayers and practices given to the faithful by the Church to be powerful weapons for your personal arsenal in the battle against Satan.

In this series:
• Learn about the nature of the Anti-Christ
• How the Book of Revelation is the climax of a long struggle in which Satan and his angels have played a significant role
• The long-awaited revision of the Prayer of Exorcism
• Why Satan hates the Divine Mercy and other devotions
• The influence of Sorcery and Witchcraft
• Proof of Satanic influence in the lives of the Saints