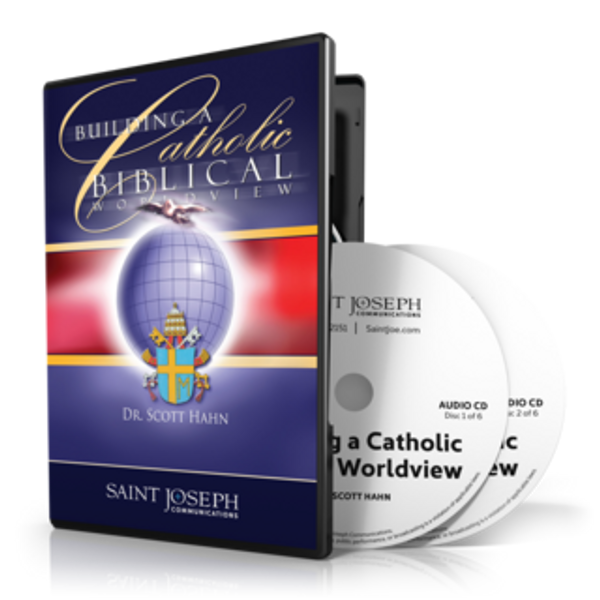 How Catholic is the way you look at reality?  This might sound like an academic question, but, whether we realize it or not, everybody is a philosopher. And, according to Scott Hahn, the problem isn't that some of us "do philosophy" and some of us don't, but that most of us do it badly!

That's why in his new CD series, Building A Catholic Biblical Worldview, the celebrated professor of theology and best-selling author reveals how you can develop a philosophy of life that's genuinely Catholic, even in the midst of our rationalistic, post-modern world.

The Word of God in the Words of Man
In this thought provoking journey toward a Catholic philosophy of life, you'll discover that an authentically Catholic worldview is also necessarily a biblical worldview.  As Scott uncovers the intimate relationship between inspiration and infallibility, you'll learn why we must allow the Bible, as God's inspired Word, to really shape our thought as Catholics.

Scott will show you how God has revealed himself in human words down through the ages; how this revelation comes to us from the Father, through the Son, in the Spirit; how the Word inspired (Scripture) is fully human and fully divine, just like the Word incarnate (Jesus); and why, as faithful followers of Christ and His Church, we must grapple with the human in order to grasp the divine.

Gain a Deeper Appreciation
In just six CDs, Scott Hahn will empower you to discover just why the Catholic view of reality is true for everybody whether they realize it, or not. You'll comprehend the vital importance of liturgy as a pillar of the Catholic worldview while learning how to debunk the "demythologizers" of modernist Biblical interpretation.

In the process, you'll discern why the authority of Scripture is not superior to Tradition, explore the important distinctions between Divine Law and Natural Law, understand how culture emerged from cult in the ancient world and so much more.

Every serious student of Catholicism will greatly benefit from the crucial insights and profound conclusions contained in this philosophical tour-de-force from one of today's most popular theologians. Order Building A Catholic Biblical Worldview today and begin your journey into a more authentically Catholic way of life.

Why the Catholic view of reality is true for everybody whether they realize it, or not
The meaning of "mythology" in the biblical worldview
How a modern scientific man can accept the New Testament
The important distinctions between Divine Law and Natural Law
The most substantial fallacy of the modern worldview
How the Apostles Creed is composed entirely of Biblical terms
How dogmas are the Church's authoritative interpretation of Scripture

The Birth of the Catholic Church (Digital)

A Biblical Understanding of Mary (Digital)

Mother Angelica on God, His Home, and His Angels

What Every Catholic Needs To Know About Hell (DVD)