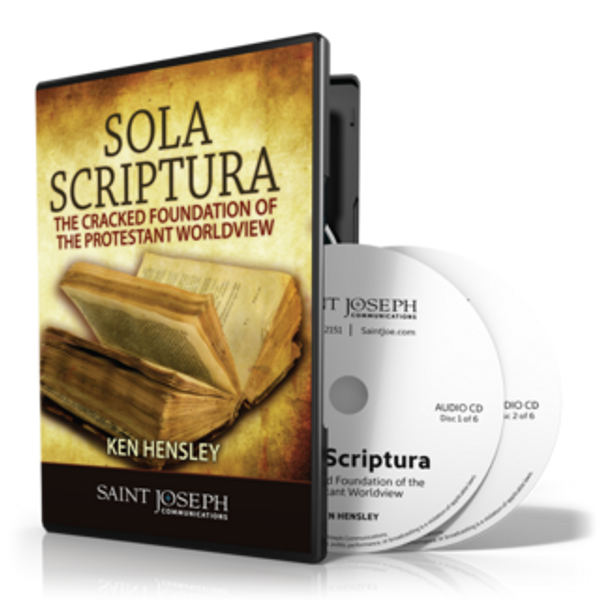 Whatever else may separate them, Protestant Christians invariably agree on two points: the Catholic Church is not an infallible authority, and the “Bible alone” is the sole rule of faith. The latter, according to former Protestant Pastor Ken Hensley, is the foundational doctrine of Protestantism, and so long as they believe this foundation is strong and intact your Protestant friends or loved ones will continue to reject the Church no matter how strong a case you make for any particular Catholic teaching.

But now, you can discover how to effectively evangelize our separated brethren by decisively dismantling this fundamental Protestant doctrine with Sola Scriptura: The Cracked Foundation of the Protestant Worldview.

Stimulating and Thought Provoking
A Baptist minister for 11 years before his conversion, Ken Hensley reminds us that the Church accepts our “separated brethren” precisely as brothers and sisters, but brothers and sisters in need of the fullness of Faith. “They already know Christ,” he says, “we want them to know His church.” Ken clearly relates that we cannot blame the separation among Christians on those who are born and brought up in Protestant communities, but we also know that Christ doesn’t want His body to be broken up into thousands of competing and contradictory sects.

That’s why this former pastor’s passion focuses on making the case for Catholicism. In this stimulating and thought provoking six talk series, you’ll discover the crucial first step. Ken begins by demonstrating how one’s worldview is like a building. And if you wanted to tear down a building how would you do it—one brick at a time, or with a bulldozer? In this series, you’ll learn to avoid taking on the Protestant worldview one issue at a time, but rather to “bulldoze” its very foundation.

Clear Biblical Teaching
However, Ken maintains that sola scriptura is not merely one belief, but a complex of beliefs that embraces all that is implied by the rejection of an authoritative Church. For instance, you’ll discover how the Protestant practice of private interpretation of the Bible must inevitably lead to individualism, skepticism, subjectivism, division and doctrinal chaos; how, in reality, Protestants already accept authority outside the Bible; how the Protestant insistence on the right to private judgment ironically rejects the clear Biblical teaching that God has given His Church a sure method for deciding the correct interpretation of Scripture; and much more!

In Sola Scriptura: The Cracked Foundation of the Protestant Worldview, you’ll learn how to utterly dismantle Protestantism’s foundational doctrine as Ken Hensley reveals the “Bible alone” idea to be unscriptural, unhistorical, illogical and ultimately unworkable—conclusively demonstrating from history, Tradition and Scripture itself, that sola scriptura is a self-refuting proposition and proving that if sola scriptura is not true, then Protestantism as a worldview cannot be true.

Sola Scriptura: The Cracked Foundation of The Protestant Worldview