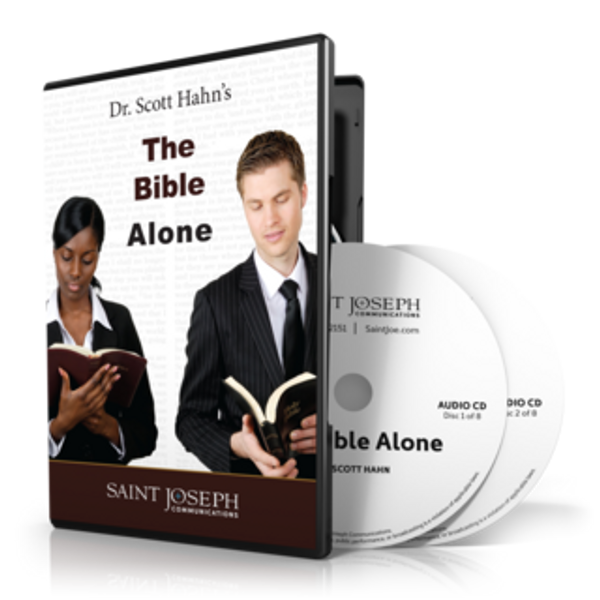 The Revolutionary Series that Brought Thousands Back into the Catholic Church!
Where in the Bible does it say that the Bible alone is the sole rule of faith? This seemingly innocent question from a Protestant university student started then-Presbyterian minister Scott Hahn on a dramatic search that brought him to the ironic conclusion that the Reformation doctrine of sola scriptura (the Bible alone) is, in fact, unbiblical! This prompted an amazing journey that brought one of today’s finest Biblical thinkers into the Catholic Church. And this classic presentation brought in thousands more!

The Case for Sola Scriptura

An Authoritative Guide
In his exhaustive examination of the Bible texts classically used by Protestants to “prove” sola scriptura, Dr. Hahn shows how these verses (properly interpreted) actually point back to the witness of the Church’s Tradition. We learn how the early Church saw that scripture alone -- the Hebrew Bible at that time -- was not enough, but rather, realized the need for the authority of the Church.

Answered!
How did the Church function for 350 years without the NT canon?
Why would the Holy Spirit wait fourteen centuries to reveal such an important “truth” as sola scriptura?
How to view the Bible in the living Tradition of the Church
What is the modern Protestant response to Catholic evidence against sola scriptura?
Why Dr. Hahn’s honest presentation of both sides of this issue allows listeners to decide for themselves
How the “Bible alone” doctrine is, ironically, unbiblical
Where the Bible condemns the private interpretation of Scripture
When and where the “Bible alone” doctrine was introduced
Who does Scripture say is the official interpreter of Scripture?
And much more

How To Study The Bible (Digital)

The Bible Made Me Do It (Digital)