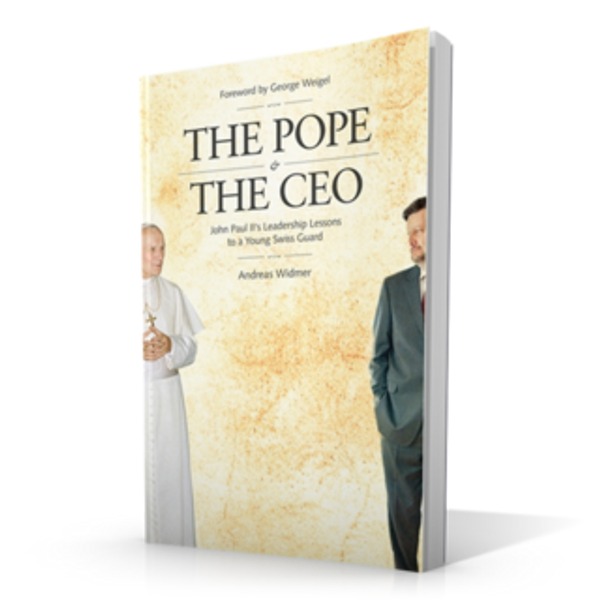 This up-close look at the pope’s influence raises the bar for leadership to new heights. Christian executives, CEOs, entrepreneurs, small business owners—anyone who wants to avoid mediocrity—will find the lessons Widmer learned and imparts both inspirational and practical. The Pope & The CEO offers nine chapters of stories and reflections about John Paul II and practical applications connecting those teachings to the world of business, big or small, and to anyone wanting to lead a team of people in today’s world.

Published by Emmaus Road, this is a first of its kind look into the life of a Swiss Guard and what he learned from perhaps the greatest Christian of our time. Widmer’s observation of John Paul II, and his direct experience of the late pope’s approach to leadership, had a profound impact on the way he sees the centrality of human interaction: “When you were with the Holy Father, you felt like you were the reason he got up in the morning.”

Andreas Widmer is a former Swiss Guard, an entrepreneur, and the co-founder of the SEVEN Fund, a philanthropic organization that promotes enterprise solutions to poverty. Widmer is a dedicated husband and father.

Praise for the Pope & the CEO:

“Andreas Widmer is an honest man, a good man, and an insightful man. His reflections on what he learned from perhaps the greatest Christian of our time offer all of us a powerful example of leadership at work.”

“John Paul II's witness to the reality of God's grace in the life of a man so inspired and touched the life of one Swiss guard, that when the latter became an entrepreneur and a CEO, he set himself to emulate the virtues of leadership of the Pope. In this book, the Swiss-Guard-turned-CEO gives a personal witness to the successful application of the Pope's leadership virtues and offers the same to other CEOs and all of his readers. The book is thus an excellent tribute to the memory of the Pope and a commendable guide to successful entrepreneurship.”

—Cardinal Peter Turkson, President of the Pontifical Council for Justice and Peace

Unprotected: A Pope the Pill and the Perils of Sexual Chaos